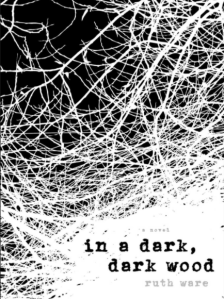 I love how the cover of this novel goes with my blog theme! Anyway, this was an okay-ish book. Lots of twists and turns, however it was a little unrealistic for me. I had really high expectations for this book, and although the beginning of the book was fabulous, it honestly fell flat for me shortly thereafter.

Leonora Shaw is incredibly surprised when she receives an invitation to her old friend’s bachelorette party at a cozy cottage, or so she thinks. Leonora lives an isolated life as a writer who doesn’t communicate much with others. She can usually be found holed up in her house writing her novels, or sending emails to her publishers. She contacts one of her other friends, who is also invited to the party, and checks in with her to see if she is attending the party. Her friend tells her that she too has been taken by surprise after having received this invitation out of the blue. Nonetheless, Nora impulsively accepts the invitation and this simple action sets off a number of events that nobody saw coming.

Once Leonora arrives at the cottage, she notices that it actually isn’t much of a cottage. More like a creepy, sinister glass house located in the woods. As the days progress, there are some interesting interactions between the party guests, and Leonora notices that they are all not alone and that there is in fact someone else in these woods who is possibly watching their every move. Who could it be? Is it someone they know, or a stranger?

I can’t go into too much detail otherwise I will most definitely give away what the book is about. I honestly felt as though so much more could be added to this book because it seemed to skim over the surface in a lot of its most thrilling parts, which is mainly the reason as to why I rate this book 3/5 stars.

Have you read this novel? If so, what did you think of it?